A Masons' Beadle explains the role of the figure that proceeds the Master.

Beadle, sometimes spelled "bedel" is derived from the Latin "bidellus" or "bedellus", rooted in words for "herald." He was originally an official of the Roman Temple. The word Beadle has also been used to describe early policemen and church or parish wardens.

The Livery Companies, as they evolved, needed a point of contact between the Master, Wardens, and Court of Assistants and the Livery in general. They therefore appointed (and paid for) a Beadle, who took care of the Company's meeting place ('Hall'), called the Court members and/or Livery together on behalf of the Master, and enforced any disciplinary measures decided by the Court.

The Beadle would also find suitable apprentices, and would organise the social and ceremonial functions. He was, in summary, a policeman, an almoner, a friend, social worker and communicator. 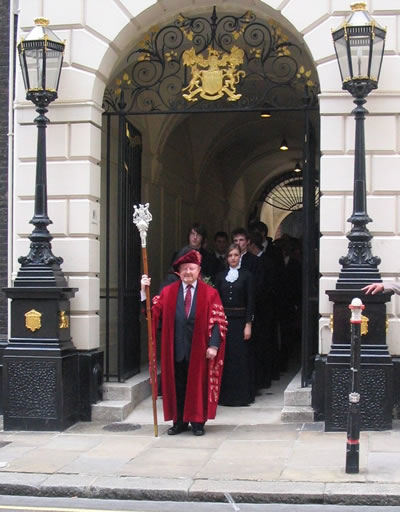 He would be issued with a Staff of Office, often wrongly called a mace, with which to protect the Master and enforce discipline. The Staff is usually a tall one so that it could be used as a rallying point at Common Hall etc. when the Livery was summoned to "Attend upon the Master".

Whilst the Livery all lived and worked within the Square Mile, the Beadle was able to summon them personally, but, as people became dispersed, there grew a need for someone who could write and so use the new postal services to summon the Court. The humble Clerk then began his rise in importance to his position today as the chief executive of the Company. The office of Beadle, meanwhile, has become a ceremonial function.

The Beadle in most Companies retains his stewardship of the Company's property, including in many cases, the fabric of buildings owned by a Company. The Beadle advises on matters of protocol, and acts in collaboration with the Clerk, to ensure all Livery functions take place smoothly and with due decorum; that the required regalia and treasure is produced, in place, and returned to the vaults after a function. He will attend the Master and Wardens on all proper occasions, to ensure that they are properly gowned and badged, and to assist the company by acting as Toastmaster at all its functions.