Our History | The Beadle at War

As everyone knows, the Second World War saw extensive destruction in the City of London. Few Livery Halls escaped damage. Some were rescued from the ruins and restored, some were re-built on their existing sites and some were re-located to begin a new life within the City; some never rose again.

The resident Beadles had a major role to play in protecting the Halls and their treasured contents. Here is one such story.

One of the Founding Members

By November 1940 The Cutlers' Company realised that plans were needed to protect the Cutlers' Hall from incendiary bombs. Night-watchmen were urgently required but there was a dearth of suitable men. Eventually a man was found and in return for £1 per week and the provision of bed and breakfast, he was to attend the Hall during the hours of blackout, to sleep there, to go on duty whenever there was an 'alert' and to help the Beadle to fight any fires that might break out. Buckets of water and sand were to be postioned on all floors. But on 29th December 1940 the Luftwaffe launched a fire-raid against the City which no amount of water and sand could withstand.

Soon after 6.30 in the evening the sirens sounded and almost immediately the incendiary bombs started to rain down. The German bombers were intent on destroying the Cathedral and all around fierce fires sprang up. The buildings on the north side of St. Paul's Churchyard were the first to go up in flames, quickly followed by those in Paternoster Row.

A light, southerly wind fanned the flames as the firebrigade tried to stop the spread of the fires. Their efforts were concentrated on preventing the flames reaching further buildings - those already alight could not be saved. Then suddenly the water pressure in their hoses dropped to nothing. Apparently they were drawing the water from the Thames and the tide had gone out so far that the Brigade was unable to pump water to the top of Ludgate Hill. The firemen had to standby, powerless.

The buildings at the corner of Ludgate Hill and Ave Maria Lane were seized by the flames and a huge fire began to creep northwards towards Cutlers' Hall. For two hours Beadle Fred Hall and his wife watched the fires coming closer and closer - not only from the south along Warwick Lane but also coming at them from the east, along Newgate Street. With the flames within 200yds of his hall (and his home), Beadle Hall and Mrs Hall were ordered to evacuate the building. They took with them just a few clothes and belongings. The Beadle and an ARP Warden took Mrs Hall to the relative safety of Old Bailey but Beadle Hall refused to quit his post and returned to the steps of the Old General Post Office Office Building in Newgate Street, 100yds north of Cutlers. From here he watched the progress of the fire towards his beloved building but he knew he could do little but be a witness to its destruction.

Two thoughts were uppermost in the Beadle's mind at this moment - first to see what was going to happen to the hall and secondly 'to keep an eye on the wine cellar' after all, there were nearly 600 bottles of the Taylor '27 and 40 cases of Croft '20 to be defended against the Nazi terror.

It now seemed that nothing could save the hall from the flames engulfing the rest of Warwick Lane. Without warning the firemen heard the glad sound of water in the hoses, the pressure steadily rose and the spread of the fire was checked and eventually beaten back. Then, guided by The Beadle, the firemen got up onto the roof and flooded it with water to stop the flying sparks from the buildings opposite getting a hold.

Thus was Cutlers' Hall saved at the last moment, suffering no damage but for some comparatively unimportant glass being cracked by the surrounding inferno. Practically all of Warick Lane was destroyed that night. 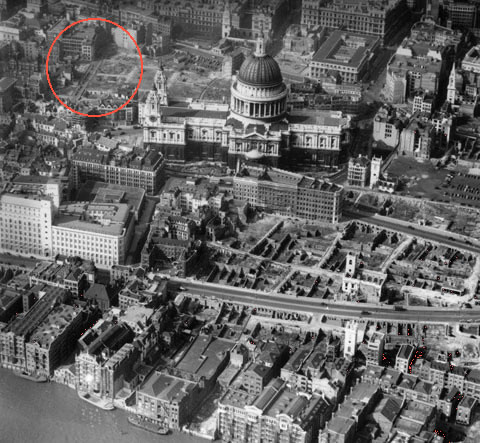 Five months later the Cutlers' Hall was not so fortunate.

On the night of 10/11 May 1941 the Hall was extensively damaged when a large bomb demolished the adjacent building, on the corner of Newgate Street. Beadle Fred Hall and Mrs Hall escaped very shaken but unharmed